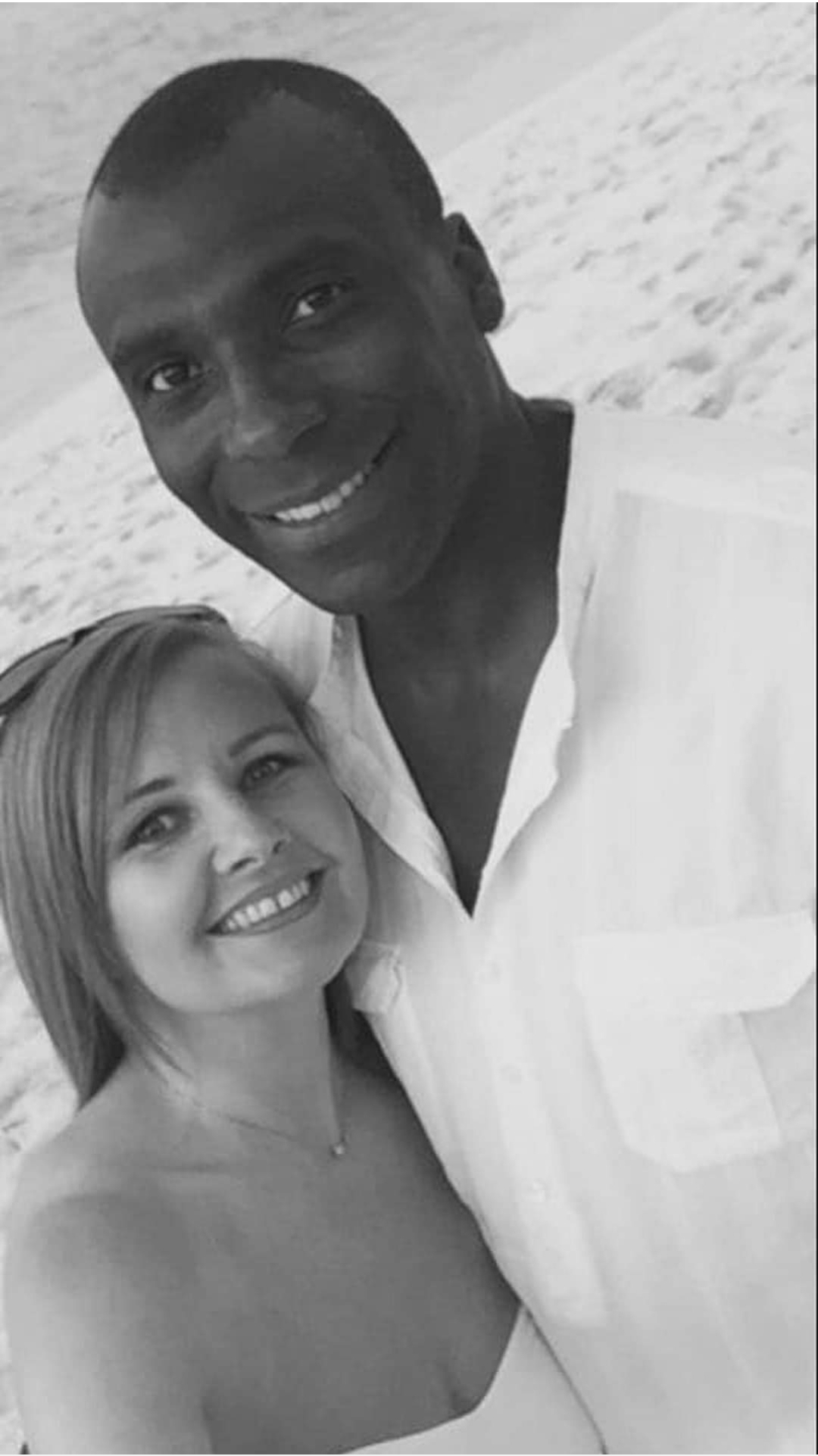 Our story.
Firstly, my husband Ricky Casey – my very own hero. Also a Greater Manchester firefighter!
Unfortunately, our story doesn’t have the fairytale ending that we imagined when we met the love of our lives. Ricky asked me to marry him in Spain, September 2017. I was the happiest girl ever. We were busy making wedding plans for 2019 and enjoying life, when in March 2018 Ricky started feeling unwell. It started with a dull ache in his left testicle. That didn’t seem to cause too much trouble at first, because it was sporadic. But after a couple of weeks the ache got stronger and was constant, along with a loss of appetite and pain in his stomach.
Ricky’s first visit to the GP resulted in a course of antibiotics. The doctor seemed to think this was a completely common thing in men. While on antibiotics, Ricky’s testicle started to swell intermittently. He was feeling bloated all the time and he lost more weight.
He went back to the doctor feeling concerned, but the GP said he just needed to try a stronger antibiotic. The GP couldn’t feel anything wrong with his testicle and sent him away again with more tablets. Ricky wasn’t improving; in fact, he lost more weight, started to get an ache in his stomach and flank, lost his appetite, and the pain was waking him up in the night now.
On his third visit to the GP, we saw a different doctor who we pushed for an ultrasound scan. Eventually! But in the meantime while we were waiting for the scan appointment, I had to take Ricky to A&E because his pain became unbearable. At the hospital, Ricky had his first set of blood tests. But again they sent us home with pain killers saying they thought it sounded like he had kidney stones. We were told to wait for the scan and he may pass the stones by then!
Ricky was really suffering with pain and trying to carry on. By the time Ricky had his first ultrasound scan it was May 2018 and we waited more than 2 weeks for the results! Ricky was still at work full time and struggling with the pain and suffering. I still don’t know how he did this. At the beginning of June, we went back to the doctors for the results of the ultrasound scan. The doctor decided to send us to the hospital for a chest X-ray and bloods because Ricky had developed a cough that wasn’t going away. Ricky was still taking antibiotics and his symptoms where getting worse, not better. Every time he ate he was uncomfortable and bloated. He had pain and aches in his testicle and stomach, sweats and he had an awful cough. The chest X-ray didn’t pick picked anything up at this point, but Ricky was due to have his first CT scan beginning of June. At the end of June the results showed an enlarged kidney so more tests. By chance the CT scan picked up a shadow on the bottom of the lung. This needed further investigation. At the end of June, Ricky was working the moorland grass fires and these where his last days as an operational firefighter; he wasn’t fit for work anymore and unfortunately had to be pulled off the job. This devastated us both realizing how poorly he was. In the meantime, we received a letter discharging Ricky from urology suggesting he may have lymphoma. This was our first diagnosis; from kidney stones or infection to now this. We were referred to a hematologist to then find out it wasn’t lymphoma and were passed over again. Beginning of July, Ricky had a chest scan and an appointment at the respiratory department for the results at the end of July. Obviously, the doctors were still unsure about the diagnosis. So more bloods and further tests. The doctor decided to do an emergency lung bronchoscopy while we were at the hospital. They found a large swollen gland in his chest and smaller ones in his lungs from the CT and MRI scan. They decided to take a biopsy from the lung since this was less invasive than a kidney biopsy. They first thought it was lymphoma because the kidney and neck masses appeared similar and we would need to be referred yet again to another department. Ricky then had another biopsy taken from his neck. At the end of July the doctors were still trying to diagnose Ricky’s condition. Ricky’s kidney function had dropped and the bronchoscopy detected another tumor. We were told that the doctors couldn’t decide which type of cancer this was (unknown primary cancer) and were struggling to come up with a treatment plan. They needed to run further tests and multidisciplinary team (MDT) meetings.

A couple of weeks after the MDT meetings and scans, they decided they thought the primary was in the kidney and had spread to the lungs. And from that meeting decided to take Ricky in for an emergency kidney biopsy the following morning. This was the beginning of August and Ricky was obviously still suffering and declining through the months, and was no further on with starting treatment and a diagnosis. They discharged him from hospital and on 15th August we had our first appointment at the Christie Hospital with hope that they had a plan of treatment and definite diagnosis. We were so frustrated and frightened by this and months had passed. The outcome of the appointment wasn’t what we were expecting. I can remember this day so clearly – to be told your husband had a rare form of kidney cancer called renal medullary carcinoma (RMC) that is linked to sickle cell disease and the doctors didn’t really know enough or see enough people with this cancer. Treatment is limited and he was already at stage 4. Also we were told that surgery wasn’t an option and the kidney couldn’t be be removed because of the size and complications this would cause. This was proving to be complicated across the board.  We had to wait until the end of August to start chemotherapy due to the results from ongoing tests that were needed for the treatment plan. This was obviously making us anxious because we wanted to get going with it; months where passing and Ricky was getting worse. When Ricky started treatment at the end of August, he had a very positive outcome to the first cycle of chemotherapy. All his tumors shrank by 60% and this type of cancer is supposedly chemo-resistant. So you can imagine that we were over the moon and we had hope.  We decided at this point to get married in December; the year before we were due to marry. We both felt the time was right and why wait? Ricky started his second round of chemotherapy, which showed no changes. Ricky started to pick up more and more infections and didn’t seem to be as well. After discussions with the doctor, the only option was to watch and wait and keep an eye on how Ricky was doing, which was devastating to hear. It was like everyone had given up on us. Alternatively, we could apply for a drug that had been recommended by the oncologist. This was difficult process and took some time; time that we didn’t feel we had. It was January 2019 and we were married. We decided to go on our honeymoon while waiting. This was something Ricky really wanted to do even though he had started to struggle a little bit more. On returning home we found we weren’t successful in our application for the drug recommended by the oncologist, which was refused on grounds of no evidence that the drug would work for Ricky. We could pay for the drug privately, and we were already raising money to fund the drug in case this was the outcome.  As his wife, it was a 24/7 battle; no giving up and no negative thoughts or vibes. Which Ricky 100% got on board with. We were a couple and giving up or losing was never an option. He was a hero, I was his rock! It was, and still is, a massive shock that we lost because as a couple it was never going to happen to us, never. Right until the very end, we were talking and making future plans daily. It’s so hard and difficult to see the person you plan to spend the rest of your life with change before your eyes and then pass away so suddenly, and I couldn’t do anything. I felt it was a constant push and battle to move things on quickly, and had to be a constant pest to doctors. Research took over my life. I practically gave up my work to look after Ricky and try to keep him healthy in mind and body and to be with him always. It is tough to keep yourself and the love of your life positive. This was a very quick and sudden change of life for us and it all happened so fast; 9 months in total. This is a massive thing to come to terms with for me and still feels unreal. And now suddenly alone, left without my husband. I honestly do feel early diagnosis is key. If the doctors had acted quicker and recognized the symptoms and signs of this disease and if we had been able to have the drug, Ricky may have been with me today and had better quality of life and years. It has left me with feelings of anger and the need to help change things and help people in Ricky’s memory.
And now just months later I am doing just that, I’m  raising awareness across the UK , I’m setting up a trust in my husbands name .