A Mother’s Love For Her Son 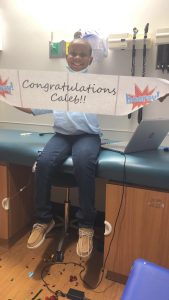 March 11, 2019, I had the pleasure of speaking to Jalana Wheeler. She was a mother of one son and was desperately seeking answers regarding renal medullary carcinoma (RMC).  Caleb was just 9 years old when he was diagnosed with this rare, aggressive and often fatal form of kidney cancer. Jalana was a mother on a mission to save the life of her young son. She shared with me that the doctors told her that he possibly wouldn’t make it to Christmas 2019, but Jalana knew better. She did her research and was not afraid to ask questions.  Her journey with Caleb began the latter part of 2018, when she noticed that her son was losing weight and became lethargic. She was told that it was the medication that he was taking that was causing him to lose weight. He began to vomit right after Thanksgiving 2018, and was taken to the Emergency Room (ER). The physicians diagnosed Caleb as having the flu and it will pass. She took Caleb to the ER again and this time she was told that her son had pneumonia. He was given antibiotics which did not seem to help Caleb as his symptoms persisted. He was discharged and while at home, he kept telling his Mom that his chest was hurting and stated that he needed to go to the ER.  This time, he was admitted to the hospital with a diagnosis of pneumonia. Caleb continued to vomit. The physician on call was African American and really seemed concerned about Caleb as he continued to visit him every morning even thought Caleb was not his patient.  Caleb’s condition did not improve with the antibiotics nor the breathing treatments. The attending physician made rounds and was ready to discharge Caleb even though there were not any signs of improvement. Jalana demanded to see another physician who in turn ordered a CT Scan. The results of the CT scan revealed that her son had a tumor in his right kidney suspicious of cancer. His right kidney and lymph nodes were removed the same day. Caleb recovered well from the surgery and while she waited for the results of the biopsy, she was given a book on childhood cancer, Renal Cell Carcinoma (RCC) & Wills Tumor. A couple days later, she received a called from the doctor asking if Caleb had sickle cell trait. Once they were told that Caleb indeed had sickle cell trait, the diagnosis was confirmed that he had Stage IV RMC. Caleb was admitted to The Children’s Hospital in Alabama to find out that this physician had only treated two patients with this diagnosis. Jalana continue her research and inquired about MD Anderson Cancer Center in Houston.  They did not treat children younger than 12 and was informed to check out Texas Children’s Hospital. This frantic mother wanted the best care for her son, but because he was on Medicaid and lived in Alabama, he was denied access to hospitals in Houston. The great news is that two years later Caleb remains cancer free and Jalana is now an advocate for RMC. It is her desire that Caleb’s journey will inspire others battling Renal Medullary Carcinoma to not give up nor give in to RMC.