Captain Andre Snead’s Journey With RMC Give Others Hope 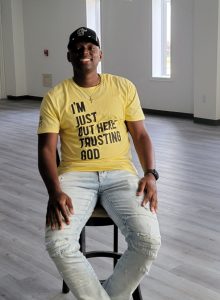 My name is Andre Snead. I am a 35-year-old male who serves as a Captain in the US Army. I would like to share my journey with how Renal Medullary Carcinoma (RMC) impacted my life. I first started showing symptoms in December 2018 with flank pain and hematuria (blood in urine), which the doctors believed to be kidney stones. The following month, the symptoms showed up again and I was treated and discharged. In March 2019, I decided to go to a urologist for further tests (PET Scan and biopsy). The results were shocking as they revealed a mass on my right kidney and I immediately had a right nephrectomy. After my surgery, the oncologist visited my room and stated that I had Stage 4 kidney cancer. This is when I first learned that I was diagnosed with RMC, an aggressive form of kidney cancer associated with the sickle cell trait. I was devastated and heartbroken because the prognosis was poor as I was given only 4 months to live. Through the social workers at the hospital, I learned of another RMC patient who was treated at MD Anderson Cancer Center and had great scan results. This story provided me hope and from that day forward, I decided that I would beat this disease by maintaining my faith in God and having a positive mindset. I started my first chemotherapy regimen at MD Anderson Cancer Center in June 2019, which was a combination of Doxorubicin, Gemcitabine, and Ixazomib. The initial results showed promise as the tumors began to shrink in size. After about 6 cycles, the cancer became resistant to the treatment and the progress slowed. My oncologist switched my treatment plan to immunotherapy, which included Nivolumab (Opdivo) plus Ipilimumab (Yervoy). Once again, the results showed that the tumors were shrinking, but after 4 cycles progress slowed. My next chemotherapy regimen was Cisplatin, Gemcitabine, and Ifosfamide. This regimen lasted for about 4 cycles. The tumors were shrinking, but the cancer became resistant and progress slowed. Around June 2020, my oncologist decided to change my treatment plan to a different chemotherapy regimen (Carboplatin and Paclitaxel). I underwent this chemotherapy in conjunction with targeted radiation therapy. After 6 cycles of this chemotherapy and 28 cycles of radiation, the results showed great progress. In October 2020, I received my first CLEAR SCAN!!! I was overjoyed as this RMC journey is long and tough. Every 3-4 months, I have a CT scan to check my progression. After about 1 year, my scans are still clear. I want to thank my family, friends, medical care team, military family, Chris Johnson Foundation and other cancer groups/organizations for all of the great support, care and assistance during my journey. I look forward to being a great RMC advocate to help educate, build awareness and provide inspiration that ultimately results in a cure for RMC!